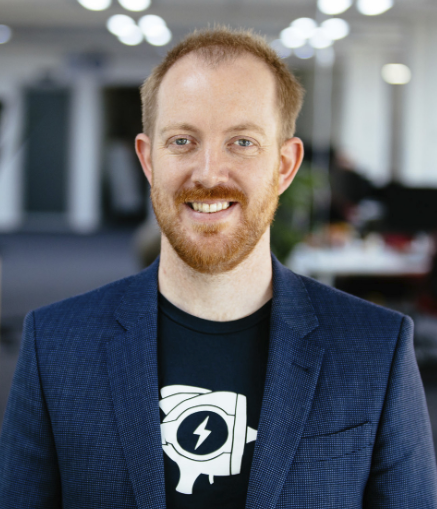 A box of lego with an infinite number of pieces

We got a family computer when I was 8 years old. Then when I was 9 I taught myself how to write software on it. For me, it felt like I had discovered a box of lego with an infinite number of pieces, because I could build whatever I wanted. The only limitation was my own creativity and problem-solving. I didn’t need to convince my parents to buy more lego, I just needed the computer. It was like discovering a portal to an entirely new universe.

“From the age of 9 I decided I wanted to build a software company.”

Back then I would put in my Microsoft Encarta ‘94 CD and type ‘software’, because I couldn’t go on the internet - we didn’t have that back then. It was on that CD that I read about this chap called ‘Bill Gates’, and that’s when 9-year-old me said; “actually, I do have a passion for software.” It wasn’t so much that I was wildly impressed by Bill Gates. I was, of course, but I was more excited about the opportunity it presented. That this software thing I was passionate about could lead to a career. And turns out it did more than that.

From high school hawker to CEO

I started selling software commercially in high school to other kids. A few years later, at university, I ran a PC repair company and also built a PC retailer. Then, at the end of university, I decided I would see what a ‘real job’ looked like.

So I applied for a job with Intergen. I decided if they hired me I would see what it was like, and if they didn’t I wasn’t too fussed because I would just keep doing my own thing. In the end they did hire me and I learnt a bunch while I was there.

I spent three years at Intergen before deciding it was time to strike out on my own. I set up a company called Mindscape with my business partner Jeremy Boyd (or as he’s also affectionately known, “JB”). Together we built developer tools. One of which ended up turning into what is now Raygun.

One of the things I’m most proud of as we continue to build our business is thinking about all the people who work here and how the work we do supports their families and lifestyles. That’s the bit I feel most proud about.

JB is very much focused on the technical side, which means I’m in the CEO role and he’s the Chief Scientist, doing more of the deep dive stuff. On the weekends I still do coding on personal projects because I have a strong interest in that. That was my goal. And now my goal is driving the success of the business. I’m highly motivated by the impact it can have on the New Zealand economy.

I think software overcomes many of the natural disadvantages that New Zealand has in terms of distance to market, and especially in this age of climate concern. You don’t have to physically ship it anywhere, so it doesn’t matter where it’s built, and not having to transport it across the globe means it’s carbon footprint is much smaller. That’s great for a country so far away from the rest of the world. I believe if we want New Zealand to be successful it’s about the export dollars coming in, not how we tax each other or trade houses.

“Why are we sending logs around the world when we could be sending high-margin electrons?”

I typically get up between 5:30-6:30am and clear emails. We have an international customer base, so there’s often a pile of things that have come in while we’ve been asleep. Then throughout the week it’s the usual meetings, setting the direction, repeating the values and strategy, checking where things are at and trying to help grow our people.

It’s interesting to think about an average day. There’s certainly an overall pattern, but I used to joke that the best and worst part of my day was when I would wake up, reach for my phone, see my emails and messages and within about 30 seconds I’d know whether I would be in a good mood all day or a bad one.

“It wasn’t a particularly healthy way to start the day.”

But that was particularly true when we were smaller and things felt a little bit more life and death. These days it’s not such a rollercoaster. It’s more about the people inside the company.

I’d be remiss not to say that the reason my day starts a bit earlier than some is more related to having a two-year-old son now.

Working when I’m not working

I read a lot of books. I probably read 2-3 books per month; lots of business biographies and other non fiction books. It’s how I try to educate myself for the next stage of the business. It also helps me structure the guidance and advice I’m giving others in the organisation. One I’m reading at the moment is The Four Obsessions of an Extraordinary Executive.

I’m quite a big watcher of Youtube videos too. There are so many great mini documentaries on this stuff. I tend to use books for learning and Youtube for inspiration and insights. I’m also on Twitter for better or worse. Twitter is a fantastic tool for keeping your finger on the things that are  happening inside an industry. I get insights by following people who work for certain companies who are doing things that will matter to us. They’re the ways that I do work.

Discovering what gets me jazzed

Something I often think about is how hard it is to create motivation and inspiration on demand. We all have those days when we’re supercharged and really excited to get stuck in, and then other days where we’re not.

I couldn’t really recognise the rhyme or reason to this, but I did realise that I would get quite inspired by the film Ironman. It was because I’m a software geek in business like Tony Stark, but he builds all the cool stuff alone at home and doesn’t really have to manage people which is the hardest part of the job, right? So I recognised this and thought, you know, I don’t have two hours every day to watch a movie to get myself in a jazzed state. So I purchased some video editing software and spliced out the scenes I was actually getting the most from.

“Now I have a 17 minute video clip that I can watch when I’m not really feeling it, I can fire that up and get myself jazzed on demand.”

I fundamentally believe people need to lean into their weirdness. First of all, weirdness is a fundamental lie. We’re all weird, anyone who’s claiming they’re not is just trying to fit in. Certainly it shouldn't have a negative impact on others, but embrace your weirdness because that’s where your power lies. I do the same thing with cheeseburgers. I refuse to eat the bottom bread of the cheeseburger because of the carb count, but I leave a small patch for my thumbs so they don’t get oily from the patty. I certainly get some weird looks because I forget about how weird that is. People are like ‘why have you got stacks of bread there?’